“First we would like to extend sincere apologies to all ATHEIST fans around the world. We have been silent on the matter of a former member being dismissed for some time, but we were entirely focussed on recording our new album “Jupiter”. Therefore, we did not want to get sidetracked on an issue, which, quite honestly, was far less important to us than it might appear to some looking in from the outside.

“When we came together to write again, it was an obvious choice, for several reasons, to try and continue in what has been our touring line-up. We’ve had such a great time together on the road for the past four years. We’re all great friends, and all of us were working peacefully towards the completion of the album. Therefore it hit us very unexpectedly when Tony called one day and informed us that he would not record with us. What’s worse is that this happened only four weeks prior to our confirmed studio date. This left us in a very unfortunate position and without a choice.

“Although we are quite angry with him for this extremely late, and inconsiderate, change of heart, we have no desire to let this become personal or start some public feud. We simply want to be sure the facts are out there so we can get on with writing and playing music. While this might come as a surprise to some, we simply shrugged our shoulders and continued on, un-phased, for one simple reason: Tony was never instrumental to ATHEIST’s sound in the first place. The true genius behind the technical bass lines of “Unquestionable Presence” was co-founding member Roger Patterson. It’s not well known to today’s fans that Roger actually wrote all the bass tracks just prior to his ultimately sad and tragic death and deserves the credit. Tony simply played what was written. However, the public perception has become distorted over the past two decades. It was the trio of Steve, Kelly and Roger who helped to bring ATHEIST alive – and continue to do so today – without Roger of course. Tony had no influence on the band’s original sound.

“It was that one young, gifted kid, Roger Patterson, who inspired subsequent generations of bass players to delve into technical metal and bring their instrument to the forefront. Yet unfortunately Roger has not always received the credit due to him. With all due respect, most of the credit has been misplaced on Tony. It was actually following Roger’s terrible accident that Tony joined us, after Doug Keyser from WATCHTOWER declined our offer to join for personal reasons. It must be said that nobody can deny Tony did a good job of playing the parts written by another musician. We will never stop being thankful for Tony to step in and help us out at that most difficult time. He remains a great friend. Apart from that, however, Tony’s contribution to the sound of ATHEIST consists only of his participation as a fifth contributing member in writing “Elements”. We leave it to CYNIC and PESTILENCE to tell their own stories, if anybody feels the need to hear them.

“Those who are close to us know we do not like to discuss band business publically. We prefer to keep those things internal, as they have nothing to do with the music. Yet this story must be told for a variety of reasons – primarily to honour Roger!

“Thus, with this very brief glimpse into our history, we hope people understand why we handled things like we did and why we were able to react quickly when Tony left us in the lurch just before the recording of “Jupiter”. As with previous classic ATHEIST material, Tony had not contributed to the writing of “Jupiter” in any significant way, so we did not have to start over. Also, we had no intention to accept any further delay caused by Tony, especially since there was already an extremely talented young musician in our ranks: Jonathan Thompson (guitar). Not only did Jonathan do his intricate guitar lines flawlessly on “Jupiter”, but as a huge fan of Roger’s work, he also wrote and performed the very impressive and original bass lines on this album as well. That is quite a story in itself. Tony may tour with ATHEIST, but for now it shall suffice that rather than settle for some random guy, we went with the best and kept it in the family.

“Now that our work on what we hope will soon become another classical technical metal masterpiece is nearly finished and the news of Tony Choy’s removal has already reached the public, we feel the need to have our story heard instead of letting the false legend, rumour and speculation perpetuate and persist in replacing truth. ATHEIST are alive and well and “Jupiter” will prove us to be stronger than ever!”

Kelly Shaefer and Steven Flynn on behalf of ATHEIST. 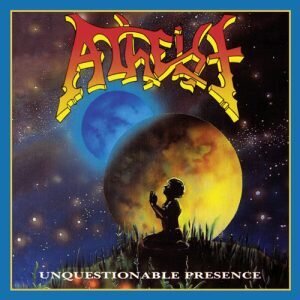 ATHEIST are currently streaming previously unreleased live footage of the band’s classic line-up performing the track “The Formative Years” at the band’s official Youtube page. This video material is taken from the forthcoming deluxe CD+DVD reissues of the technical metal pioneers’ early works. 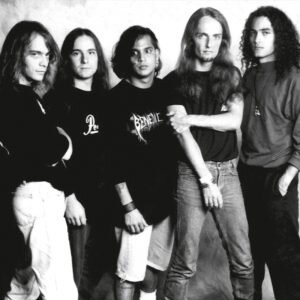 The reissues of technical Death Metal titans ATHEIST’s first three albums, namely ‘Piece of Time’, ‘Unquestionable Presence’, and ‘Elements’, are now out everywhere on coloured LPs, limited to 500 copies each.

Technical Death Metal fans will be thrilled to know that ATHEIST’s first three albums, namely “Piece of Time” (1989), “Unquestionable Presence” (1991) and “Elements” (1993), will be reissued on Season of Mist!