“Finally the first clip from “Onyx” is ready!”, mastermind Rune Eriksen comments. “It was indeed an inspiring process to be a part of, and once again Costin (Chioreanu, camera/director/editor) did an amazing job to capture these essences unto film. I believe that the mysterious surroundings and the heavy atmosphere on the locations did wonders to the feeling and the vibe of the video too. It was almost like something greater was with us those days in early February. Something which guided us and gave us the inspiration we needed. All in true, vintage Hammer fashion. I would like to extend a deep gratitude to those who did their share for this filming to go on as planned: Valeriu Catalineanu, Corina Craja, Vlad Lordache, Florin Ene, Alexandru Barbulescu, Andy Ionescu & Ghita Adrian. They all worked hard for this video to unfold the way it did. Last, but certainly not least, a very special salute goes to Mr. Costin Chioreanu & Twilight13 Media, who did an amazing job during the events, and whose dedication, determination and hard work resulted in something truly special (again). We are eternally grateful! From the deep wintry forests of Samurcasi and the haunted ruins of Chiajna Monastery, “Majesty” is hereby presented.”

Director Costin adds: “For me, to make “Majesty” was a real challenge. But when you have really special artists to work with, the true art reveals. It’s by far the most intense video I ever made, spiritually speaking. And that was mostly caused by the intense sharing of artistic thoughts and visions between Rune, Carmen and me and my crew. It was a deep chemistry there, and that is the best air for an artist to breathe.”

On other news, AVA INFERI will support MY DYING BRIDE on their 20th anniversary “Albion in Ruin” Tour 2011. This will also mark AVA INFERI’s first proper tour to the UK and their first ever visit on Irish soil. The five date trek will take place as follows:

Check the Tour Dates section of the website for other tour dates.

“Onyx” is available in Digipak edition on Season of Mist’s e-shop. 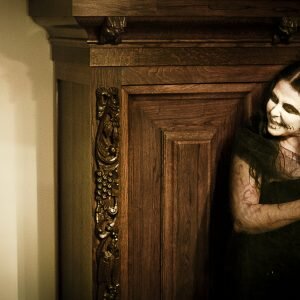 The fourth album of atmospheric doomsters AVA INFERI is entitled “Onyx” and has been scheduled for a February 14th, 2011 (one day later in the US) release. Take a look at the cover artwork and tracklist of the Portuguese / Norwegians’ new opus: