More information about Cult Of The Initiated

American blackened death metal icons PESSIMIST (ft. Kelly McLauchlin of POSSESSED, I AM MORBID, etc.) will be issuing their first three albums on vinyl for the first time ever! ‘Cult of the Initiated,’ (1997) ‘Blood for the Gods,’ (1999) and ‘Slaughtering the Faithful’ (2002) will all contain never-before-heard bonus tracks and other extras as well, such as new layouts and rare, archival band photos. The release dates are as follows:

A trailer for the reissues can be seen HERE.

Founding member and guitarist Kelly Mclaughin comments: “About the reissues, there is so much to say – the albums sound amazing! They have all been remastered, and it’s the best they have ever sounded. ‘Cult’ features completely new artwork, and will be a 25th-Anniversary release. Each reissue includes previously-unreleased bonus tracks, even the song order has been updated. All the reissues feature new layouts, rare and never-before seen band pics from early eras of the band. Some will be surprised to see our newly-revamped Pessimist logo, as well. Everything has been done to make these reissues something really cool and special for the fans, and absolutely the best they can be.”

The trilogy is now available for pre-orders HERE.

Stay tuned for more news from the band soon… 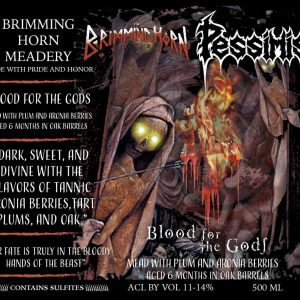 American blackened death metal icons PESSIMIST (ft. Kelly McLauchlin of POSSESSED, I AM MORBID, etc.) will be releasing their signature “Blood for the Gods” mead as part of Brimming Horn Meadery’s ‘Mead and Metal” series! The mead is made with plum and aronia berries that have been aged 6 month in oak barrels, promising a “dark, sweet, and divine” flavor palate. The drink will be made available on June 11 to coincide with the release of the vinyl reissue of the band’s sophomore record of the same name. 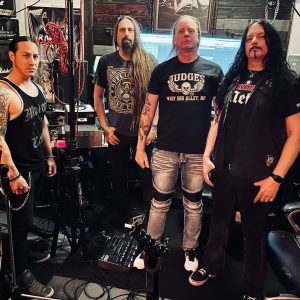 American blackened death metal icons PESSIMIST (ft. Kelly McLauchlin of POSSESSED, I AM MORBID, etc.) have now entered the  Black Attack Studios in Los Angeles, CA (USA) to begin recording their long awaited  fourth full-length album, ‘Keys to the Underworld,’ with engineer Ira Black! This will be the band’s first full-length record since 2002’s ‘Slaughtering the Faithful.’ In addition, the band is also now welcoming drummer Tim Yeung (I AM MORBID, DIVINE HERESY, HATE ETERNAL, etc.) to the recording lineup! ‘Keys to the Underworld’ will be released by Season of Mist at a later date. Stay tuned! 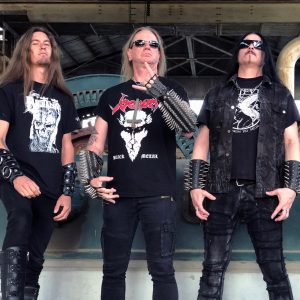 Season of Mist is pleased to announce the signing of American death metal icons PESSIMIST (ft. Kelly McLauchlin of I AM MORBID, EX-live POSSESSED, etc.)! In addition to a new full-length, which the band is currently writing, the label will be releasing the band’s early full-length records in the coming months. Stay tuned!