Season of Mist is excited to announce the signing of Canadian act RAGE NUCLEAIRE! Formed by ex-CRYPTOPSY vocalist Lord Worm, the black metal act has been working on their debut album “Unrelenting Fucking Hatred” for quite a while and describes it as a “hate-filled blend of melodic black metal and violent industrial.”

“If anyone had ever told me that someday I’d be signed to Season of Mist, I’d have laughed at them”, guitarist Dark Rage comments. “The point is, being accepted into the SoM family, along with such ungodly notables as ARCKANUM, MAYHEM and DEATHSPELL OMEGA, is like being given a Sith name – it feels great to be part of SoM’s evil empire.”

Adds Lord Worm: “The three of us seem to share the same bleak world vision, for one thing, and this shows up very clearly in the compositions. Alvater used to be in the godly Frozen Shadows, and I know he hasn’t spent nearly a fraction of his accumulated rage. Dark Rage and I don’t do a lot of cretinous smiling, either.” 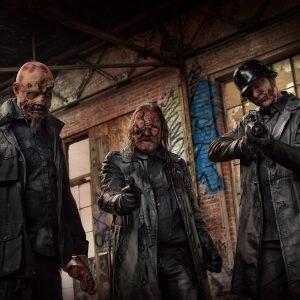 Canadian extreme metallers RAGE NUCLÉAIRE are now streaming their forthcoming new album ‘Black Storm of Violence’ in its entirety! The brutally bulldozering full-length can be heard through the following exclusive media partners:

Canadian extreme metallers RAGE NUCLÉAIRE have unveiled the cover artwork of forthcoming full length ‘Black Storm of Violence’, which you can see below. The band also unleashed a new track taken from the album. The song entitled “Ritual Murder (And Its Attendant Blessings)” is streaming at the following locations:

Canadian black metallers RAGE NUCLEAIRE have finished recording their brand new full length album. A follow-up to their ferocious debut ‘Unrelenting Fucking Hatred’, the band has announced the album will be titled ‘Black Storm of Violence’, and will be released on the Season of Mist Underground Activists division on July 18th (July 22nd in North America).