Seminally influential Extreme Metal act MORBID ANGEL have set “Illud Divinum Insanus” as the title of their eagerly awaited forthcoming album, which has been scheduled for a June 6th release (one day later in North America). “Illud Divinum Insanus” will be MORBID ANGEL’s eighth studio album, and the first since legendary frontman David Vincent rejoined the fold. Here is the cover artwork of this new opus, designed by Gustavo Sazes: 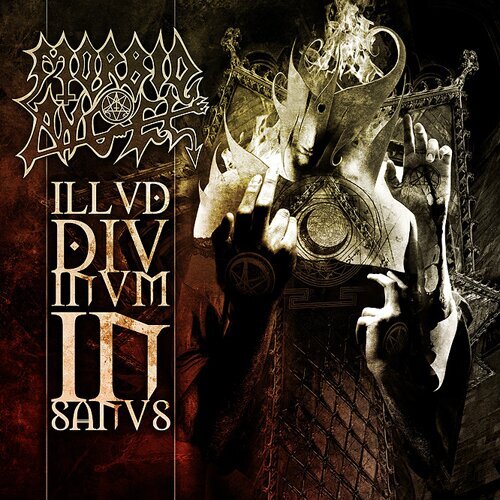 The artist stated: “To create this cover we worked from several references, ideas, elements, and I would say a ”world” of options and paths. After a long brainstorming period and some [good and bad] ideas left behind we came up with the concept of this organic surreal insane being; a fallen God or a weird mirror image of our own madness. It is a different Morbid Angel cover for sure, but I think that’s how Morbid Angel is…Deviant and different on each new release. They never repeat themselves. They are always pushing the boundaries and setting new standards. I’m really proud of the final results and hope the fans appreciate my work, while listening to the new album!”

Prior to the release of the album, a single for the song “Nevermore” will be out on May 16th as 7″ vinyl and digital download. The B side is an exclusive version of new song “Destructos VS the Earth”, remixed by COMBICHRIST.

“Of all the remixes I’ve been asked to do I never expected one of the world’s most notorious death metal bands to have an interest in hearing their music on the dance floor”, COMBICHRIST mainman Andy LaPlegua comments. “However, ‘Destructos’ is one of those tracks that are so versatile that it could have been recorded as a folk song and it would still sound amazing. I’m honored to be a part of this project and am excited to see how the Morbid Angel fans react to this unusual new direction.”

The cover artwork for the single was designed by French artists Valnoir and Fursy Teyssier for Metastazis: 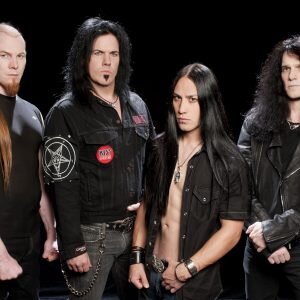 MORBID ANGEL are about to kick off their special European tour! This is your once in a lifetime chance to see the legendary death metal outfit celebrate the 20th anniversary of their milestone release ‘Covenant’ by performing the complete album live. We strongly recommend to get tickets early. A full list of shows can be viewed below.

The renowned Eindhoven Metal Meeting in the Netherlands has announced Season of Mist band MORBID ANGEL as festival headliner for Saturday, December 13th at the Effenaar. One day earlier, their fellow label-mates CARACH ANGREN will perform in the same venue. The Dutch horror metal shooting stars are currently having a massive success on their US tour and will release their new album early 2015!

Seminal extreme metallers MORBID ANGEL have announced a special European tour for November and December this year. The legendary death metal outfit will celebrate the 20th anniversary of their milestone release ‘Covenant’ by performing the album live in its entirety. The band will embark on their long road trip in Rennes, France on November 8th and continue to blast stages all over Europe until their final show in Oslo, Norway on December 20th. 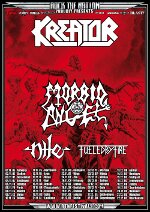 All hell has broken lose on Halloween: Extreme Metal legend MORBID ANGEL began their massive co-headlining European tour with German Thrash heroes KREATOR. There are joined by US Death Metal kings NILE and Californian thrashers FUELED BY FIRE. We strongly advise to get your tickets early for this power package.