Season of Mist is thrilled to announce that GHOST BRIGADE are staying in the Season of Mist family, after already releasing three brilliant albums of melodic doomcore culminating with 2011’s “Until Fear No Longer Defines Us.”

Comments guitarist Wille Naukkarinen on behalf of GHOST BRIGADE: “I remember when we first signed to Season of Mist some six years go, it felt a bit like stepping into the unknown. We knew the label, we had a good feeling about it but then again, we had no background in working with them so you never know how things will go. Luckily everything went fine and three albums later, it’s safe to say we made the right decision.

“So when it was time to start thinking about the future of GHOST BRIGADE, re-signing with SOM not only felt natural but was also our number one choice. We were fortunate to be in a situation where we could’ve chosen the label we want to work with but why fix something that isn’t broken? We wanted to continue working with people who believe in this band and with people who we today consider as friends. It’s hard to top that.

“Right now we are working on new material for the next album and I don’t know, somehow all this feels like a new beginning. Everyone’s super motivated and we are rehearsing more actively than ever before. And the fact that new songs are sounding great, doesn’t make things any worse. Oh and while I’m writing this, I would also like to take this opportunity to introduce two new ghosts. We figured two Jonis would be better than one so first off, we have Joni Saalamo on bass. Secondly, we FINALLY have a permanent keyboard player in the band, Joni Vanhanen. 2013 will be a good year.” 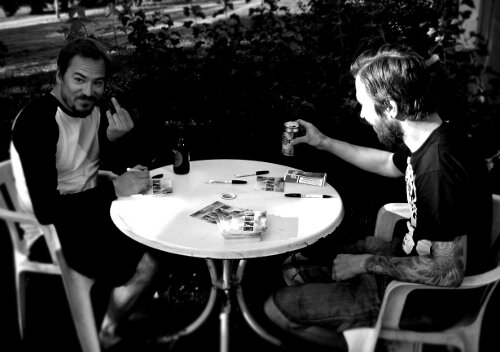 “Of all the bands we signed, GHOST BRIGADE holds a special place”, Season of Mist CEO Michael Berberian comments. “We had our share of successes the last few years with the label, sure. Bands with underground credibility, already with a CD out or two, and we took them to the next level. That’s what we do – or at least we try!

“We took GHOST BRIGADE out of the demo pile. That’s the equivalent of Mordor – a dark place where we don’t usually go unless we really have to. After listening to a punishing amount of “1st guitar lesson” bands and a few hundred copycats of whoever is popular at the moment in the US, you sometimes stumble upon a jewel. Of course, this is as rare as finding a $100 bill on the street. You heard it is possible, but it never happened to you.

“When I heard GHOST BRIGADE my jaw dropped. This was exceptional. The artwork, the originality and the sensibility all blew me away. We had to sign them, but then came the challenging part: making people agree with us! The band has worked tremendously hard and we have worked hard and GHOST BRIGADE has achieved critical and public acclaim and is on the edge of moving to the big circles. I am even prouder that we were able to do it with GHOST BRIGADE insofar as they are hardworking and decent human beings. We are extremely happy to keep them trapped at SOM a while longer!”

Currently, Ghost Brigade are tentatively scheduled to enter the studio later this year to record their next full-length. The band’s whole back catalogue is available on Season of Mist’s e-shop.