The track “The Knife” is still being featured in the US by Decibel and can be listened to here. In Europe and other parts of the world, the following official media partners are exclusively streaming the song “Electra Complex”:

The band comments: “We wrote ‘Electra Complex’ as one the first songs for this album and I really think it’s a big step forward for us as far as arrangements and ‘building tension before release’ goes”, writes guitarist Wille. “I recently read a comment from someone who heard the album that listening to this song was like being on a journey and I couldn’t agree more. Just when you thought you’ve heard it all it changes to something completely different and takes you to a new place. It might just be the first piece we’ve ever written that really shows the many faces of Ghost Brigade in one song. Put your headphones on, close your eyes, press play…”

Previously GHOST BRIGADE have released three teaser videos. The first clip of this series can still be viewed here, the second witchy teaser there and the final third act at this location. 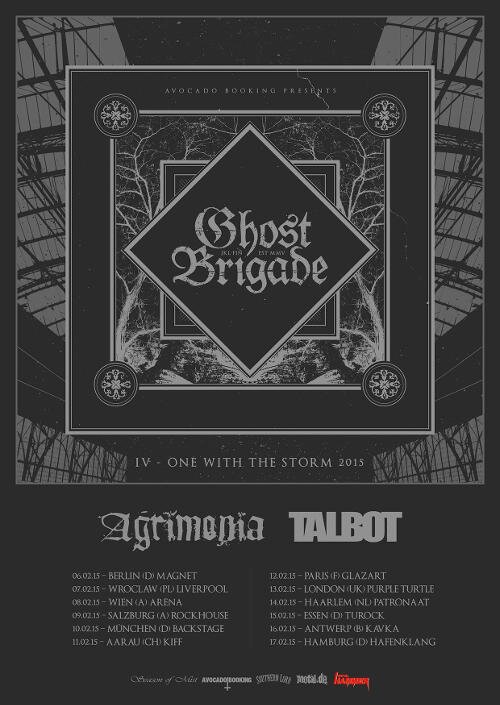 GHOST BRIGADE have announced a string of European concerts for February 2015. The Finnish masters of melancholic heaviness will be joined by AGRIMONIA from Sweden and Estonian TALBOT. The tour, presented by the German edition of Metal Hammer and Metal.de, will kick off in Germany at the Magnet, Berlin on February 6th and runs through seven more countries until a final show in Hamburg on the 17th of February. You can find a full list of confirmed dates below.

The band comments: “Friends! We are excited to announce our first European tour in three years for February 2015! We will bring great support bands with us, which both released excellent new albums and have been in heavy rotation among GHOST BRIGADE members. AGRIMONIA, feature members from AT THE GATES, MARTYRDÖD and more, come from Gothenburg, Sweden. TALBOT are a sludgy duo from Tallinn, Estonia. We saw these guys recently live and well… we had no other choice but to ask them to come on tour with us. Great band, period. See you all in February!”

Critically acclaimed Finnish melancholic metal band GHOST BRIGADE have released the third video teaser video in an ongoing campaign leading up towards the release of their highly anticipated new full-length ‘IV – One with the Storm’, which has been scheduled for release on November 7th (November 11th in North America). The clip, featuring music taken from the new album, can be viewed here.