Critically acclaimed Finnish heavy-rock band GHOST BRIGADE have released new details behind their highly anticipated new album, ‘IV: One with the Storm’, set for a November 7 release (November 11 in North America). The album artwork and track listing can be found below.

GHOST BRIGADE just released a teaser video of ‘IV: One with the Storm’. The teaser, featuring music taken from the new album, can be seen here.

‘IV: One with the Storm’ will be released as a Digipak CD with bonus tracks, deluxe clamshell box with double LP and bonus 7”, various coloured LP formats, regular CD, and merchandising. The bonus tracks on the limited Digipak and the bonus 7” are remixes of “Long Way To The Graves” and “Disembodied Voices” by Jonny Wanha, who previously remixed “In the Woods” (from previous album ‘Until Fear No Longer Defines Us’) in 2012. All formats are now available for pre-order!.

Additionally, GHOST BRIGADE are streaming their previous album, 2011’s ‘Until Fear No Longer Defines Us’, in its entirety on YouTube. 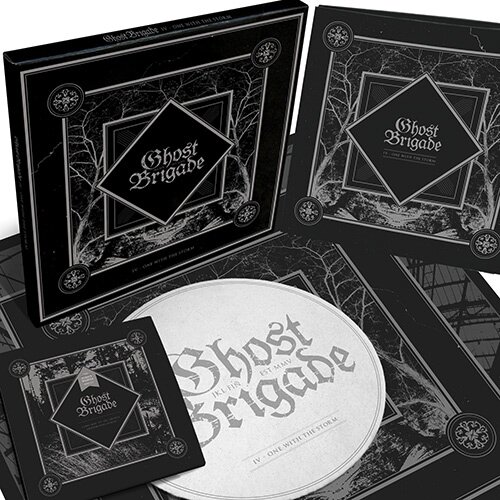